Real Time Thermal Rating is a methodology used within the power and utility sector to assess operational thermal rating of equipment, i.e. the maximum amount of electrical current that a transmission line or electrical facility can conduct before it is critically damaged.

This includes assets such as:

In the case of power cables RTTR systems is also referred to as dynamic cable rating systems.

Real time thermal rating systems typically use real-time data taken from real environment conditions and loading rather than relying on conservative theoretical assumptions. RTTR provides additional information on system capacity (or thermal headroom) and are able to indicate whether areas are stressed (overheated) or in fact have more capacity than originally anticipated.

The temperature of an asset itself, such as a power cable, is key for RTTR, as this should not increase above its design limits. This can be measured continuously if equipment utilizes a Distributed Temperature Sensing (DTS) system, otherwise this can only be estimated.

Distributed temperature sensing fibers are installed along the length of the power cable (sometimes inside the construction of the power cable itself). The cable can also be utilized for telecoms purposes as DTS systems typically utilise standard telecoms fiber optics.

Without DTS, RTTR models use estimates for cable temperature based on a thermal model of the cable plus any other available real time cable environmental data feeds combined with the real time loading information. 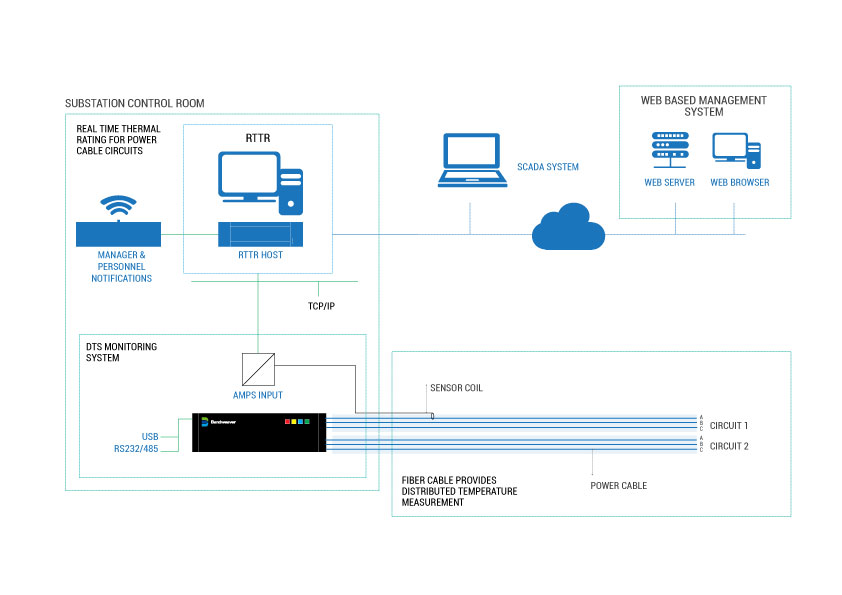 Typically thermal headroom is determined using static ratings which are based upon probabilistic methods and are representative of worst-case scenarios. The “static” design calculation methods provide simple and conservative estimates of network capacity.

In reality, networks can be complex and operational rating can be influenced by multiple factors including weather conditions and loading. Additionally, for underground equipment, soil condition, burial depth, burial configuration, cable size and type must be considered. These factors often vary along routes, even for the same circuit. As a result, network capacity determined by “static” design calculation methods could be overly conservative. It is difficult to know whether equipment is being
operated significantly below capacity or being overloaded inadvertently, which can cause premature ageing and failure.

With the introduction of Low Carbon Technologies (LCTs) such as heat pumps and electric vehicles, and an increased penetration from distributed renewable generation (i.e. photovoltaic panels, wind farms etc.), it is vital to increase the level of confidence for operators to manage their network more efficiently in a controlled manner.

Utility operators typically use one of the following methods, or a combination of some, to base their cable sizing and rating design: 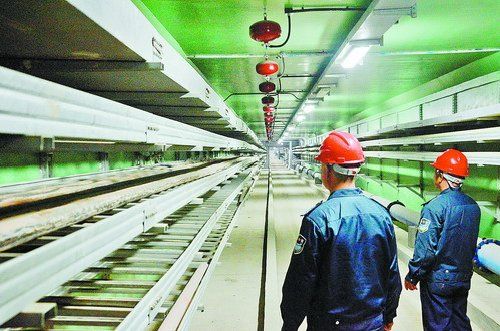 It should be noted that while the “static” design calculation methods are likely to provide conservative estimates of cable rating, they do not completely rule out the possibility of local hot spots in a cable route (either from specific localised conditions or mutual heating from cables installed in close proximity….)

Experience has shown that cable depth, soil type and the shape of load curve have a material impact on ratings and the actual worst case should be used when calculating static ratings. RTTR can determine actual thermal headroom indicating whether some unused network capacity can be released or locations where networks are constrained; especially in the complex environment containing multiple cables, complex topology and different assets.

The thermal rating model for calculating cable RTTR should be based on an established methodology such as IEC 60287 and IEC 60853. The key inputs to the RTTR cable rating modelling are required as follows:

The outputs from a RTTR used in a buried cable environment include:

Technologies for the exploitation of overhead line RTTRs can be broadly categorised into the following 4 categories:

Technologies that use current rating-based techniques monitor or estimate the environmental conditions (wind speed, wind direction, solar radiation and ambient temperature) in the vicinity of the overhead line. Using environmental conditions monitored in real-time, together with fixed parameters (such as the conductor diameter), the maximum current rating of the overhead line conductor may be calculated that corresponds to the maximum operating (design) temperature. Three widely-used standards for modelling overhead line current limits have been produced by the IEC1, CIGRE2 and the IEEE3.

The normal load rating of a transformer is determined by the equations in IEC 60076 Part 7 which dictates that its hot spot temperature reaches no more than 98 degrees. At this temperature, the transformer should not exhibit excessively fast ageing and should be able to sustain this loading for its design life. Under outage (N-1) conditions, transformers may run at up to 140% of their rated load for a short period. Regulations (e.g P15) also have contingency to take into account cyclic loading.

For Transformers, RTTR systems utilise measurements including transformer load, ambient and transformer temperatures based on the equations set out in IEC 6007. With the exception of emergency ratings, P15 recommends using an average ambient temperature and a weighted average that produces the same aging if the temperature varies over a load cycle.

However there are specific anomalies within transformers, including

By measuring the load, oil temperature or winding hot spot temperature and ambient temperature the thermal behaviour and using the IEC differential equations, the real time rating of a transformer can be determined. In the case of distribution transformers it is not possible to retrofit oil temperature monitoring, the nearest practical proxy is the frame temperature.

The additional but static information that is required for RTTR includes: