Perimeter Intrusion Detection Systems (PIDS) are systems used in an external environment to detect the presence of an intruder attempting to breach a perimeter. The adoption of fiber optic Distributed Acoustic Sensing (DAS) technology is growing rapidly as part of PIDS strategies for a number of companies across a range of industries.

PIDS deployed on or in conjunction with a fence or other physical barrier (e.g. DAS cable or other motion sensors mounted on a fence).

PIDS deployed below ground (again a DAS cable can be used or pressure sensitive cable or electromagnetic field). These do not require a physical barrier.

PIDS deployed above ground that do not need to be installed on or in conjunction with a physical barrier (e.g. bistatic microwave link).

PIDS that are designed for temporary deployment; for example, to protect a mobile asset. Typically this would cover military applications and again DAS sensing technology has been very successfully deployed in these environments.

When deciding on the specification and selection of any PIDS system the following factors must be taken into consideration:

All of these factors will affect the key choices made by an organisation and there are also other-point to consider including:

In some scenarios, particularly where perimeters are large or the asset is critical, the asset owner may choose to use multiple technologies and integrate the respective monitoring systems through a centralized control system (e.g. Video cameras combined with DAS, where the cameras slew to the specific event when an alert is raised.)

Distributed Acoustic Sensing systems can monitor the acoustic signals along the length of the fiber optic cable and are able to classify the acoustic signatures and pinpoint the location of an intrusion event to typically within 5 m.

The distributed acoustic sensing system consists of an interrogation unit with the relevant optoelectronic components (laser source(s), detectors and associated processing hardware, firmware and software) to monitor a length of optical fiber cable which can be run outside, on and inside the perimeter. These DAS systems have different distance capabilities ranging from 5 km to 100 km. The examples below show how a single system can be configured to monitor inside, outside and on the perimeter itself. 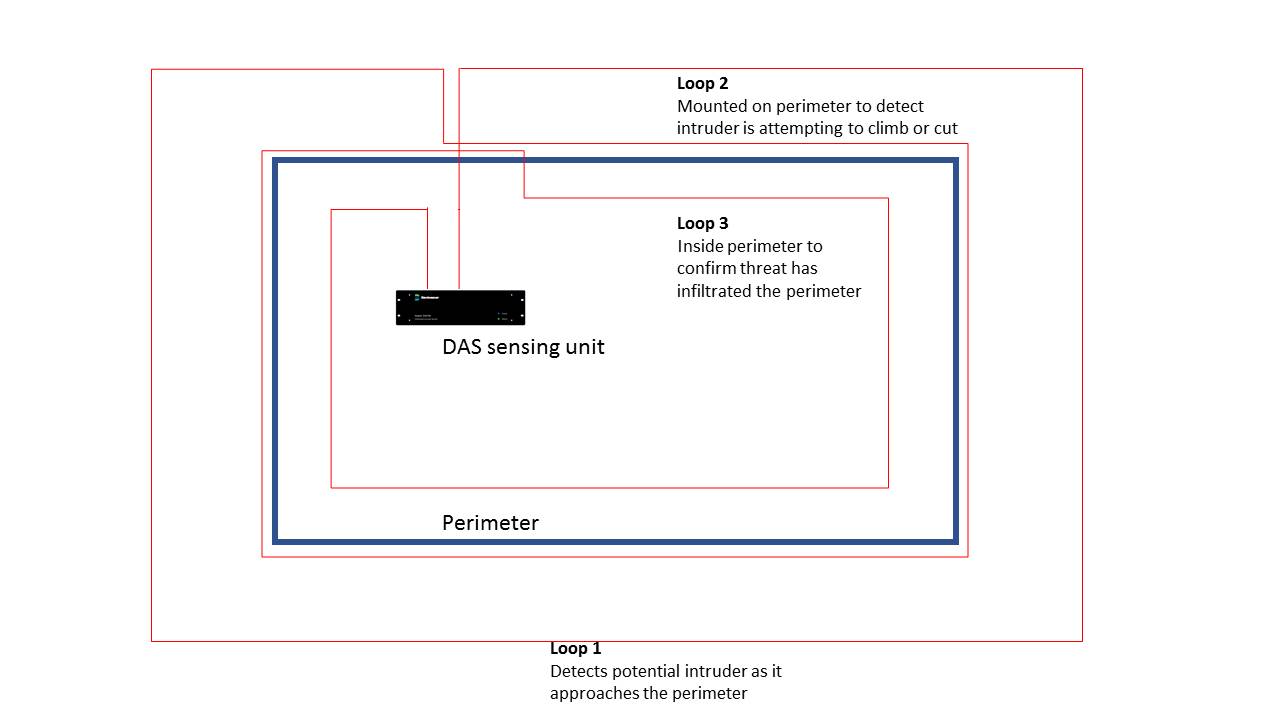 The fact that the systems are able to classify the event and to provide an “acoustic fingerprint” of the intrusion event is very powerful as this allows the system to distinguish between personnel, vehicles, animals and whether specific activity is occurring (such as digging or fence climbing).

Whether the cable is buried or fence or wall mounted will affect how the system is tuned and used. For a buried cable a lot of the high frequency noise is filtered out by the earth surrounding the cable and so it is less susceptible to false alarms caused by environmental events.

As mentioned above DAS systems are able to classify events according to their acoustic signatures. Typically the types of classifications that are required in most intrusion scenarios include:

The systems can detect personnel walking and monitor the cadence of the footfall, enabling the distinction between walking and running and also to distinguish between bipeds (people) and quadrupeds (animals). Typically for walking this can be alerted within 5 m of the cable.

Vehicles will be detected both from the sound of the engine and the energy dissipated in the ground. Depending on the size of the vehicle these can be detected within 10-20m from the cable.

Digging whether it is a person or a mechanical machine imparts rhythmic and high energy bursts into the ground and has a clear signature. The typical range is from 5-50m depending on how large the mechanical vehicle. 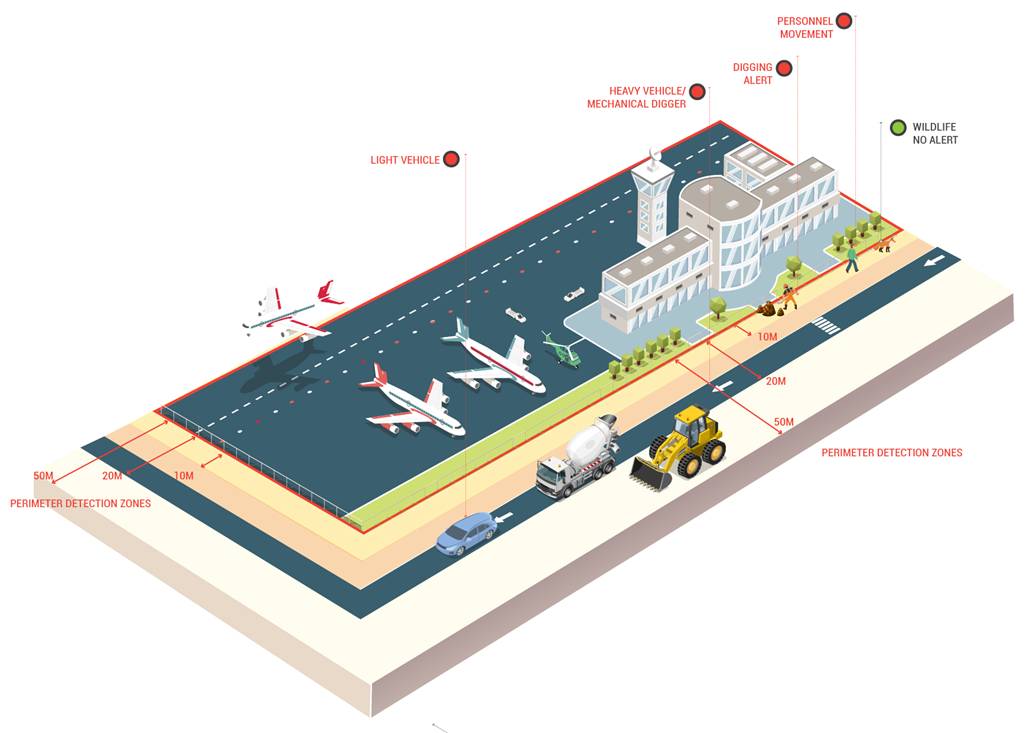 DAS systems have the ability to configure multiple smart zones, with user configurable alarms for each zone which can be adapted as the environmental conditions evolve in order to prevent nuisance alarms from such events. They can also detect multiple events at once and so this makes it more challenging for the intruder to attempt diversionary tactics.

Resistance to cable cut and sabotage

When a DAS PIDS system is configured in a loop configuration (e.g. with 2 consecutive channels), it means that the system can continue to provide full security coverage even in the event of a cut to the cable.

Naturally, it is important for any PIDS to produce a minimal number of false or nuisance alarms. If there are large numbers of false alarms then this can rapidly lead to loss of operator confidence in the PIDS and consequently, a true alarm may be missed or ignored.

The required false alarm rate (FAR) should be specified in a way which is most meaningful to the application. Examples include:

Because of the acoustic fingerprint and ability to classify individual events, DAS can be tuned to minimise nuisance alerts and intelligence can be improved the longer the system operates.

There are typically two main approaches for PIDS integration into a security system, DCS or SCADA system.

This is a more traditional method based on dry relay contacts and does not send any additional information. In this case, the intelligence must be programmed into the DAS smart alarm and each alarm is then given an addressable relay.

In this method the DAS system provides data that is transmitted to the control system. This can happen in a number of ways, it can be a predefined data stream using conventional or proprietary protocol standards (e.g. Modbus, OPC, Bosch, Honeywell…). This can be done through software provided by the PIDs system supplier or by using dedicated hardware (e.g. PLC) to communicate between the PIDS system and the DCS, SCADA or security management system. 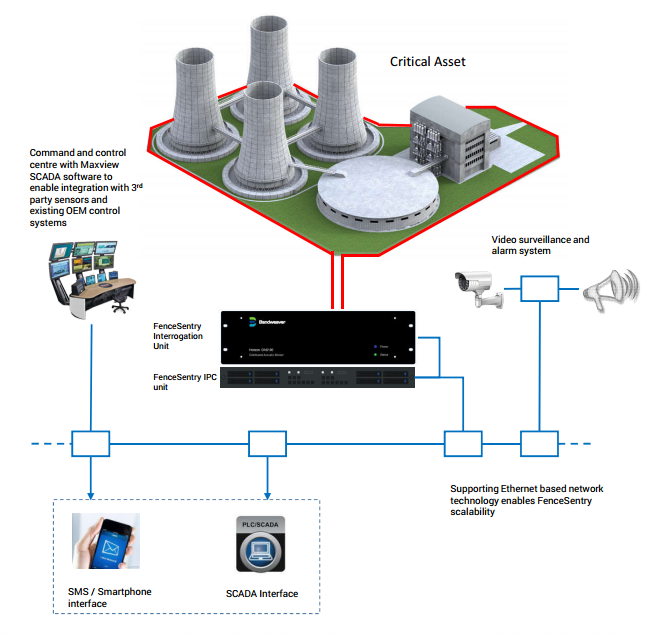